The only thing these two artists share – other than a tendency to alienate people – is my love. One had it from the start, the other snuck up and stole it. My two favorite records of 2010, reviewed in 2011 because time can’t diminish their power. Or, as Kanye puts it, “POWER.”

Kanye West: My Beautiful Dark Twisted Fantasy
The fact that he was mean to Taylor Swift once upon a time is a big part of the context, but the fantasy itself is universal. You probably haven’t fallen in love with a porn star or woken up in Paris as many times as he has, but the dark, twisted, beautifully messy personality this album exercises (“POWER”) and exorcises (all nine glorious minutes of “Runaway”) transcends those specifics. From the opening “Can we get much higher?” to the closing “Who will survive in America?” he’s including you in the conversation. And any guy who would allow Nicki Minaj to so thoroughly take over the discourse – as she does on “Monster,” overshadowing Kanye, Rick Ross, and Jay-Z – knows how to give just as good as he gets. A
*** 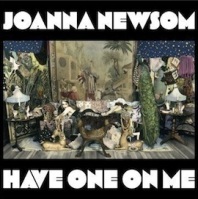 Joanna Newsom: Have One On Me
My hatred for this 29-year-old harp-playing chanteuse’s early work was so strong that I came to this album, her third, spoiling for a fight. Imagine my chagrin when she pinned me. Newsom has a habit of going all in, which in the past has meant Van Dyke Parks orchestra arrangements, cloying pastoral poetry, and a whole lot of harp. What has me going in with her on this triple album of 18 breakup songs, fully half of which are over seven minutes long, is – believe it or not – the way she reins herself in. The harp’s still there, but it’s getting a lot of help from the piano, and Newsom uses both to impart melodies a normal person could actually hum. Like obvious touchstone Joni Mitchell, she’s an acquired taste, but that high, keening voice of hers has softened, and she’s replaced the florid poetry with lived-in stuff like this: “The tap of hangers/swaying in the closet/Unburdened hooks/and empty drawers/And everywhere I tried to love you/is yours again/and only yours.” I could drink a case of that. A

Tagged Have One On Me, Joanna Newsom, Kanye West, My Beautiful Dark Twisted Fantasy

One thought on “Kanye West/Joanna Newsom”